It is one of the objectives underlying the visit of the Tanzanian Dr. Ali MCHUMO, Director General of the International Bamboo and Rattan Organization (INBAR) at the Port Authority of Kribi on Wednesday 4 March. 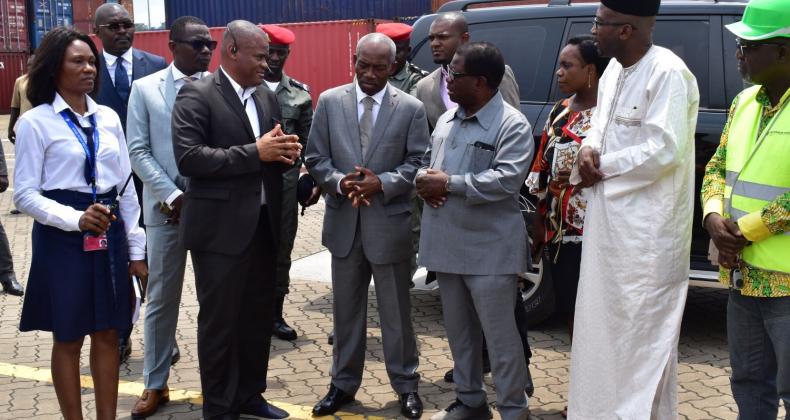 The Director General of the International Bamboo and Rattan Organization (INBAR) was personally accompanied to Kribi by Jules Doret NDONGO, Minister of Forestry and Wildlife. After a protocol stop in the resort city, the prestigious guests were driven to the site of the Deep-Sea Port of Kribi by Harouna BAKO, Deputy General Manager of the Port Authority of Kribi (PAK). The tour, unusually thorough, was done with the explanations of the Harbour Master Bertrand NDI. Talking about the aim of the visit of INBAR’s Director General in Kribi, Jules Doret NDONGO explains: “I accompanied him to Kribi for him to visit the Deep-Sea Port, a major achievement of the President of the Republic, H.E. Paul Biya.

This port was built with the funding of EximBank of China and China is actually home to INBAR’s headquarters and that is where Dr. CHUMO lives”. The Minister of Forestry and Wildlife then brought the Director General to bamboo reserves sprawling in the vicinity of the Port of Kribi. This was the opportunity for the Minister to reveal that “bamboo that very few people know about is actually the material of the future, especially in a country such as Cameroon that is exporting timber.

It takes 50 years to have another forest whereas bamboo takes only 5 years to grow. So, let’s choose bamboo which plays the same role as timber, and even more. We can cultivate, process, sell and export it”, says Jules Doret NDONGO who adds with assurance that “bamboo is the way forward”.

Last Wednesday’s visit was equally the opportunity to recall that Cameroon has been presiding over INBAR’s Council since November 2019 for a two-year term. By November 2021, Cameroon would have made good use of its position and its close ties with Dr. Ali MCHUMO to present projects to develop bamboo and rattan which can be funded by the international organization and implemented in Cameroon to benefit local craftsmen.