Skip to main content
Exploitation of the port of Kribi in 2019, more than 60 billion paid into the Public Treasury

Customs revenue were up significantly as compared to fiscal year 2018. This is due to the growing number of vessels and the volume of goods handled on the port platform during 2019. 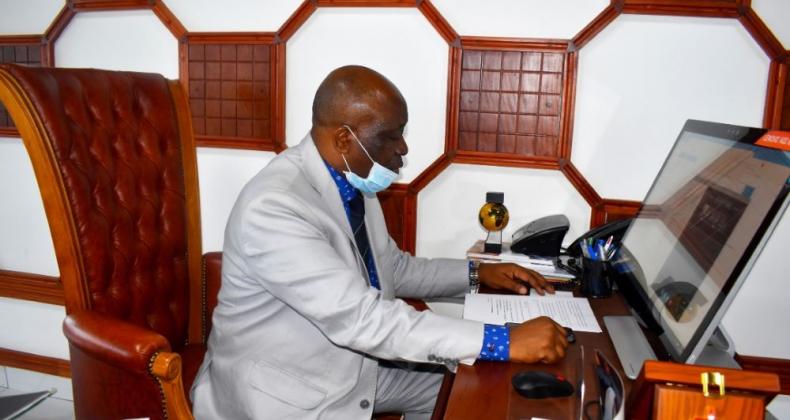 The first quarter of 2020 is over, and it must be noted that the Coronavirus pandemic has not interrupted port activities. However, it has somewhat impacted the particularly ambitious forecasts of the Port Authority of Kribi (PAK), supported by the good achievements of 2019. In fact, Thursday 16 April 2020 was the day of stocktaking for the port authority of Kribi. Due to COVID-19, which imposes social distancing, Patrice MELOM, the General Manager of the PAK convened, by video-conference, the port community of Kribi in order to draw up the balance sheet of the 2019 operations and at the same time, unveil the prospects for 2020. On the retrospective, all the stakeholders of the platform agree that compared to 2018, the year when Kribi port started its operations, 2019 has delivered on all the expectations.

Michael MAMA, PAK's Operations Manager indicates that 331 ship calls were handled in 2019 as compared to 295 in 2018, that is an increase by12%. 8.534 MT (million tonnes) of cargo handled compared to 7.019 MT in 2018, an increase by 17%. Also, the balance sheet of the operations clearly shows that Kribi fully plays its role as a break-out port, with more than 80% of transhipment activities. Although on the rise, the share of domestic activity unfortunately remains focused on imports, which also epitomises the national economy.

Patrice MELOM has praised the entire port community of Kribi for the option of dematerialisation of procedures and payments. An alternative which, according to the General Manager, has boosted the attractiveness of the Kribi destination and fully justified its current resilience in times of the bad wind called COVIF-19.