An entire week full of activities organised by women of the Port Authority of Kribi to commemorate the 2020 International Women’s Day. 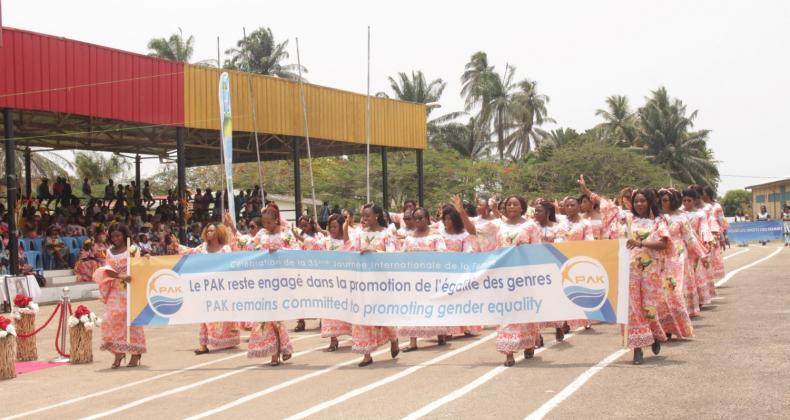 It is through a series of educational, social, cultural and sports events that the women of the Port Authority of Kribi (PAK) joined the national and international community to celebrate with majesty the 35th edition of the International Women's Day. During a week called "the Cultural Week at PAK from 2 to 8 March 2020", they set to work for the total success of festivities. It was an opportunity for them to reaffirm their determination to contributing to building up PAK in this celebration which brought them in the limelight of the company. Results undoubtedly results speak for themselves. On Monday 2nd March, an educational talk on " Promoting gender and protecting women's rights by 2020: taking stock of actions undertaken, setting a new course: the case of the port sector ", stemming from the national theme of this edition, marked the official launch. In front of panellists, young girls of the Kribi Comprehensive High School showed keen attention. Thereon, they expressed high interest especially by asking questions on the prospects and sectors leading to port professions.

On Tuesday 3rd March, a short course was held on First Aid by Dr. BINDZOULI, Head of the Sociomedical Service and Mr. FOH of the Human Resources Department. A real opportunity for learning and raising awareness for PAK women who showed their interest not only through their massive turnout, but also through an impressive interactivity, to the greatest delight of their trainer.  On Friday 6 March, activities resumed with a roundtable discussion at the Party Hall organised in collaboration with the MINPROFF Divisional Delegation. This occasion brought together women of the city from all walks of life to discuss together and with men. Everyone was able to express their vision of the struggle to build up women, the respect of their rights, and methods to be adopted, changed or improved in order to ensure a fair and equal social life for the development of all. This was followed by an excursion to Elogbatindi for donations to an orphanage and a pygmies’ camp.

On Saturday 7 March, women joyfully took part in a sports walk. Supported by men of the port community, they walked nearly eight kilometres singing and dancing. The ensuing handball and football matches against the women of Kribi 1 and Kribi 2 was another opportunity for PAK women to reveal their talent with a victory for the first match and second place for the latter. The awards ceremony was planned for the next day. On Sunday 8 March, the week ended with a march-past at the Kribi Ceremonial Ground in presence of the Divisional Officer for the Ocean Division… First, PAK women received their honours and awards from the Administrative Authorities present: best handball team, best player, and second football team. After a splendid march-past, adorned with their beautiful uniforms, they were awarded the title of Best 2020 Marching Company. The festivities ended with a lunch offered in women’s honour at La Marée Hotel. An opportunity for PAK Deputy General Manager, Mr. BAKO HAROUNA, who presided over the ceremony to call on women to reinforce the spirit of fraternity and social cohesion which are values that the General Manager and himself encourage in PAK. In other words, women play a pivotal role in the construction of PAK.