Skip to main content
Roads to open up the Port of Kribi : Things Are Getting Concrete with the AfDB

An African Development Bank evaluation mission, assisted by officials from the Ministry of Public Works, has just completed fieldwork from Edea to Campo with a stop in Kribi. 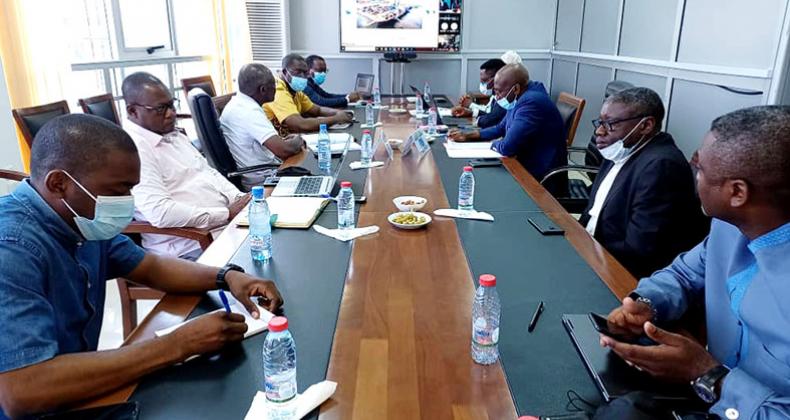 Rehabilitation of the Edea-Kribi section; development of the Lolabe-Campo axis and execution of related social projects for communities crossed by the two roads. This is the short-term plan of the African Development Bank (AfDB), which sent an evaluation mission to the Port Authority of Kribi (PAK) last 26 to 28 July. The Board of Directors of the AfDB will meet on 15 September for the final approval.

As it is the government of Cameroon, notably the Ministry of Public Works (MINTP) which is the beneficiary of the funds to be allocated within the framework of these road projects, PAK has therefore received a joint AfDB/MINTP delegation, for an evaluation mission of the Kribi Industrial-Port Roads Project (PAR-ZIK).

On Monday 26 July, before arriving in Kribi, the mission led by Pierre Simon MORE NDONG, AfDB Transport Sector Focal Point in Cameroon, made several stops on the Edea-Kribi stretch. In addition to assessing the state of the road, which has deteriorated visibly with increasing traffic, the AfDB also visited sites likely to host social projects identified along the stretch: classrooms, health centres, water boreholes, electrical connections, markets, urban road, etc.

Upon arrival in Kribi, the AfDB mission paid a courtesy visit to the Senior Divisional Officer of the Ocean Division, NOUHOU BELLO, who welcomed the good news brought by the Bank before convening all the local elected officials and Divisional Officers to a meeting to appraise the social projects identified by the AfDB and likely to be eligible for financing. Among the social projects selected by the AfDB, the Kribi Socio-Economic Development Project (PASEK), promoted by PAK

The day of Tuesday 27th was entirely devoted to assessing the Lolabe-Campo stretch, less than 40 kilometres covered in 5 hours... Projects for regrouping and resettling relocated populations, such as landing stages, were selected, in addition to a project for the preservation of marine turtles and other income-generating activities, etc.

Milestones of a structured cooperation between PAK and the AfDB

Finally, Wednesday 28 July was a day of discussions with stakeholders. At PAK, the session chaired by HAROUNA BAKO, Deputy General Manager, was an opportunity to review the PAR-ZIK, but also the PASEK. In the same way, the strategic axes of development of the Port of Kribi were presented to the donor, as well as tracks of development of a structured cooperation between the bank and the Port Authority.

During the meeting with local officials, Mr. MORE NDONG said that this evaluation mission was the final stage of the study, prior to the presentation of the projects to the AfDB Board of Directors on 15 September. In the event of approval, the selection of construction companies and the award of contracts will follow.