The United Arab Emirates, India and Sri Lanka have been connected directly since 7 May by the MIDAS1/MESAWA service, co-operated by the shipping companies MAERSK and CMA/CGM. The inaugural call was hailed by the General Manager of the PAK. 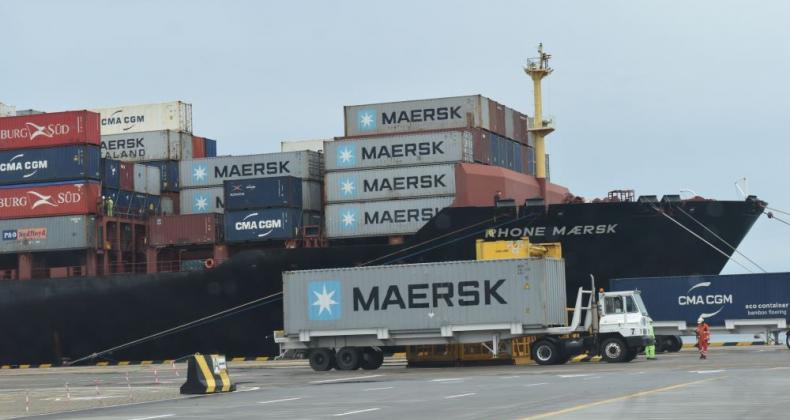 After several calls dedicated to the transhipment of goods, carried out in Kribi in 2019, Maersk Line, the world leader in maritime transport, made a resounding entrance in Kribi on 7 May 2020, marking the launching of a new service which now includes domestic import/export traffic. The inaugural call of the new service was hailed by Patrice MELOM, General Manager of the PAK, who came to the container terminal just a few hours after the docking of the Rhone MAERSK, a 250-metre-long vessel. Eric LAVENU, General Manager of KCT was with his PAK counterpart, congratulating each other on the new era opening in the Kribi deep-sea port.

According to Michael MAMA, the PAK's Operations Manager (DEX), the MIDAS1/MESAWA service is very interesting for the port of Kribi in more than one way: "firstly because it marks the arrival of a fourth shipowner who will handle domestic services, i.e. the import/export of goods via the port of Kribi", the DEX delightedly stated.

He went further to explain that the MIDAS1/MESAWA service will enable Kribi to expand its global link to world markets. In 2019, the Middle East and India accounted for approximately 9.2% of the Kribi Container Terminal's traffic in origin and 4.5% in destination of goods. "The new service, jointly operated by MAERSK and CMA/CGM, will undoubtedly increase the Container Terminal's market share for goods originating from and/or destined to this part of the world. Moreover, it will enable Cameroonian economic operators whose suppliers and/or customers come from this region to benefit from reduced transit time and competitive transport costs".

Another indirect impact, according to DEX, is the induced attractiveness of the Kribi's logistics and industrial platform, especially for investors who have commercial contracts with economic operators from the Middle East and India. Also, the start of this service will naturally trigger a very interesting commercial dynamism for the Kribi destination. Especially as the MIDAS1/MESAWA service is linked to another service that directly connects South-East Asia. This means that all the operators using this service via Kribi will be able to be linked to the worldwide network of the Danish shipowner MAERSK.