Skip to main content
Traffic diversification, WFP Cargo in the Port of Kribi 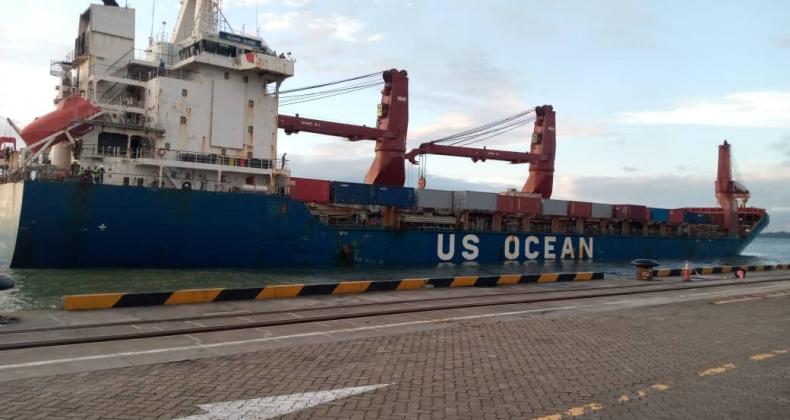 The Ocean Globe, a vessel chartered by the World Food Programme (WFP) and carrying staples left the Port of Houston a few weeks ago for the Port of Kribi. Having this bulk-carrier in Kribi is the result of an aggressive promotional campaign by PAK which finally convinced the UN agency to choose Kribi for this major logistic operation. Once the technical conditions and the provisional prerequisites were met, the Port of Kribi had to show its operational capacities among which the expertise of its teams, its accommodating capacities, its paperless procedures, its preferential tariffs and its very attractive transit-time.

It took only a few hours to unload around 309 containers and reduce the vessel’s draught (9.8 metres at the departure) before unloading its conventional cargo in Douala and, activating a land fleet of 39 trucks to carry the cargo. Though PAK teams met the logistic and technical challenge with satisfaction, it was still a humanitarian feat. As a matter of fact, the vessel was sent to Cameroon to meet the dire need of the people suffering from drought and famine in Chad, CAR and Niger, which are all landlocked countries. This humanitarian action will enable several thousand people, mostly in a critical food insecurity situation, to benefit from the food assistance provided by the UN agency. History will remember that to assist the affected children, women and men, the WFP put all hands in deck, calling the Port of Kribi for its excellent logistic capacities and its peculiarity in accommodating deepdraught vessels.

The WFP could envisage using the Port of Kribi as its maritime route after the future assessment of food security in these affected countries. In this regard, in addition to the outstanding quality of its infrastructure and its excellent navigation conditions, the Port of Kribi should continue to promote and develop its relevant connectivity offer (road, railway) that can serve its hinterland. The WFP is a humanitarian agency of the United Nations and fights against poverty in the world by providing food assistance in urgent situations and by working with communities to improve their nutritional status and strengthen their resilience. Each year, the WFP assists around 80 million people in almost 75 countries in the world.