An inter-ministerial delegation led by Roger BAKAFAN, Technical Adviser to the Ministry of Economy and Land Planning (MINEPAT) visited Kribi to inquire about the actual situation on the ground and to have a working session with the officials of the Port Authority of Kribi (PAK). 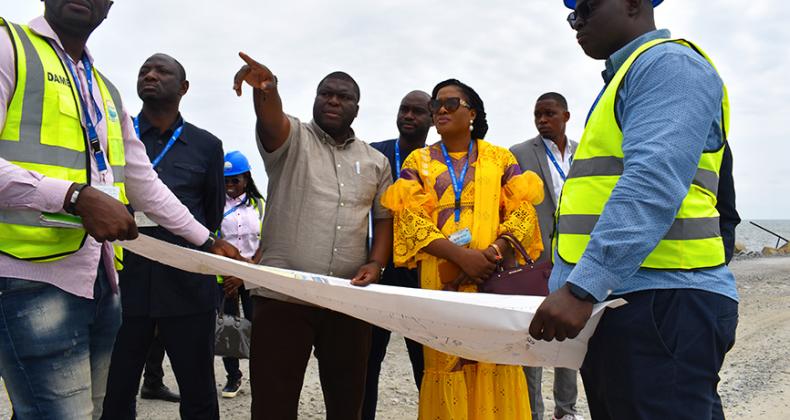 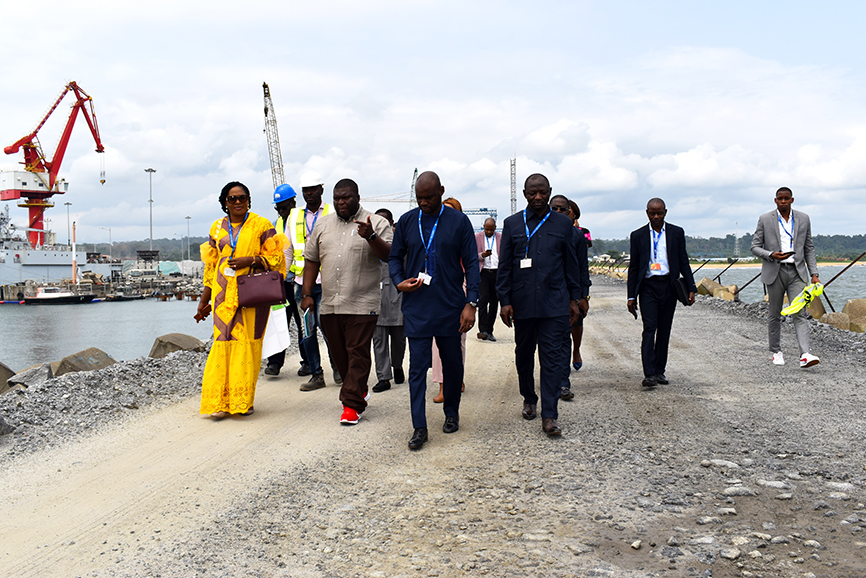 It is within the framework of the operationalization of the implementation plan of the Economic Zones of Cameroon, that an important inter-ministerial delegation made up of
representatives of MINEPAT, the Prime Minister’s Office (SPM), the Ministry of state Property, Surveys and Land Affairs (MINDCAF) and the Ministry of Public Works (MINTP) visited PAK from 13 to 14 July.
This visit which comes after the one done in July 202 aims to gather elements that will help fine tune studies for the development of an economic zone in Kribi. For the current logistic zone that will become an economic zone, the work was to identify the problems encountered by PAK and the companies already settled or under construction, and to highlight, among other things, the socio-economic impacts on the national economy, the projections in terms of job creation, the nature of the activities to be carried out and their links with the priority sectors as defined in the national strategy (SND30).

The first day of this meeting was thus completely dedicated to a guided tour of the Port of Kribi and the attached logistics zone, where the government team was able to get a first-hand idea of the realities on the ground and to identify the various challenges faced by the companies already established in the said zone.
The working session held the next day between the government delegation and PAK officials dealt mainly with the state of the issues inherent to the project of setting up an economic zone at the port of Kribi, especially those related to the regulatory framework governing economic zones, the financing of the project of setting up the Kribi economic zone, logistics (water, electricity, internet connection) and finally issues related to the connectivity of the port of Kribi and its hinterland. Specific solutions were found and resolutions taken during this cognitive meeting will be forwarded to the competent authorities. One thing for sure, this meeting between PAK officials and the inter-ministerial delegation has once again shown the will of the public authorities to speed up the implementation process of this project which will not only improve on the attractiveness of the Port of Kribi, generate a significant number of jobs but also boost the national economy which is in serious trouble with the current international economic situation.

It is worth recalling that an economic zone is a well-defined geographical area equipped with quality infrastructures and in which several fiscal, customs and administrative incentives are granted to investors to facilitate their operations. For instance, as regards the administrative aspect, the setting up of a one-stop shop will allow investors to have
a contact person who will facilitate the delivery of the necessary documents for the start of production and operation, and will also be able to act as an interface for access to all services in terms of water, energy and telecommunications. For the fiscal and customs aspect, the one-stop shop will give investors access to incentive facilities such as customs exemptions and tax abatement for a well-defined period.